Below
Across The Dark River 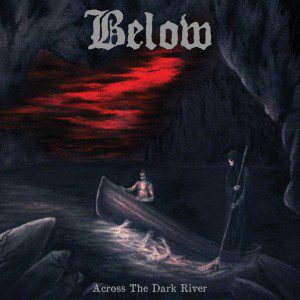 If you think you have heard everything there is by Candlemass and you are impatient about their next release, Below are the best substitute that you can find right now. These guys have burned the midnight oil studying the teachings of their compatriots and kings of doom metal. The “Epicus Doomicus Metallicus” vibe is clear as day (or maybe night on this case?) from the very first mournful riff of “Trapped under ground”.

What is also obvious from the very first song, even the very first minute when you hear that shovel digging into the soil, is the approach on the lyrical themes. Death and the journey of the soul to the other side (as depicted on the astonishing album cover), grief, despair, solitude, the supernatural and the occult element rule inside “Across The Dark River”. This is a textbook doom metal record from start to finish, forged with the utmost respect to the old tradition of doom metal songwriting. Slow and grim riffs, highlighted by melody every now and then, make each song sound like a musical entourage to one’s road to the final resting place. Check out “Portal” for example, it smells of graveyard soil from miles away.
The vocal performance by Sebastian “Zeb” Jansson of progsters Malison Rogue can lead one to the hasty conclusion that maybe he has been influenced a bit too much by Messiah Marcolin. There are times that I could envision the monk coming out of the casket (on the infamous “Bewitched” videoclip) while listening to Zeb’s vocal lines, yet the bigger picture is that Zeb uses a distinctive approach that clearly drifts more to the progressive side than the pure epic doom side. Imagine an amalgamation of Messiah and Geoff Tate (the old Geoff obviously) that gives a special, even theatrical at times, twist to Below’s music.

However, the production of the album does not really do justice to the final outcome. Most of the times everything sounds too clean and the guitar sound is somewhat weak, taking into consideration that we are talking about two guitars here. A doom metal album needs to be crushing, hard hitting and with dense sound and the clean cut production takes away much of the gloomy atmosphere. Also there are some repetitions and some not so interesting songs which could have been saved by a more “compact”, heavy sound but this production could not achieve such a thing.

In any case, the complaints mentioned above are clearly a case of personal taste in the sound of a genre and they don’t indicate something objectively bad about the album (with the exception of some mediocre tracks like “The Whitechapel Murderer”, which are counterbalanced by exceptional ones like “Mare Of The Night” my favorite one and the indicator of the heavier approach I believe they should follow). “Across the dark river” is a promising debut and a definite gem for any old school doom metal fanatics out there.