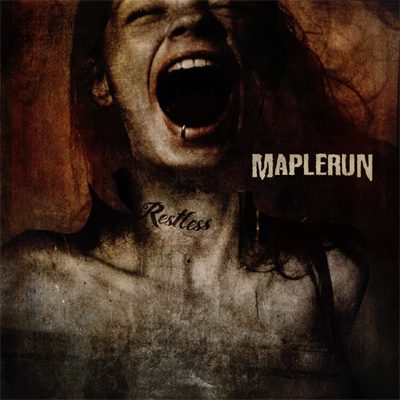 Three years after their first and very ambitious full length ”House On Fire”, Athenians Maplerun return with their second effort entitled ”Restless” and at the current moment, they have all aspects they need by their side. First of all, they took their time to create this album as careful as it could get. The experience they obtained touring with the monumental progsters Shadow Gallery will always be valuable to them, as it opened the path abroad Greece and the guys not only saw how it is to work in a constant professional basis, but they also took advantage of it and didn’t miss the chance of a lifetime.

Those who saw the guys performing live during this tour (except my own eyes, I have the benefit to know that other friends in Europe saw them live) could easily say that they kicked serious ass and the least that could be admitted is that they looked the great Americans straight in the eyes and stood rightfully beside them in this package. Two years after this tour, ”Restless” is the outcome of this new and more mature side of the band, as they know this is going to be the album that will put them strongly in the map of the bands that have something new to offer and they surely deserve your attention.

The first thing to be said about ”Restless” compared to the very good debut aforementioned is that it is better in all levels. It flows better and quicker, the debut lasted about 62 minutes if I remember well and this one is about ten minutes shorter, which are more than enough for the band to evolve and produce something much heavier, more focused and pointful to get the listener from the very beginning and many will be the ones who will find a new favourite band to Maplerun, as their sound is not very common for the middle Greek fan and the way they work surely touches the one of many foreign bands.

The album’s improvement compared to ”House On Fire” starts with the even better production which the guys did themselves (!?) and if you add the mastering by Ted Jensen (a guy who has worked with Metallica, enough said) and the cover artwork done by Travis Smith (not to mention the numerous masterpieces he’s created, I’ll just tell you to look at Psychotic Waltz‘s ”Bleeding” album which was the first I saw and gave me the chills), then you understand that the quartet took this course very seriously and that’s why they’ll see the crops of their effort springing quick enough, maybe quicker than they think themselves.

The tremendous work of the vocalist and his improvement compared to the first album is another key part you mustn’t miss. The guitars kick ass as always, the rhythm section is out of control with a crazy bassist and an unbound drummer giving pain in each pulse and beating. The four-piece created the album which is going to be the basis of their further success and evolution and all I have to do is wish them what they want most, go and live outside Greece in order to achieve the recognition they deserve and see their dreams become reality. After all, restless hearts work better when they are in constant motion.