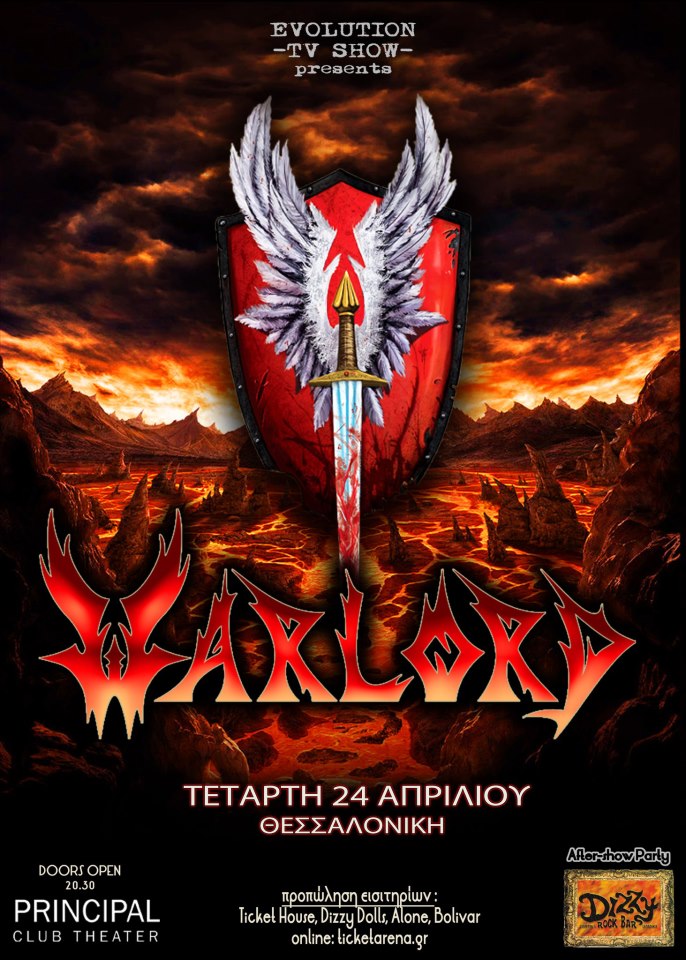 Yesterday I went to a much anticipated gig for many people as well as for me. I traveled to Thessaloniki to see Warlord live for the first time in my life and their first time in Greece. As a fan of their music, I was always curious about how they would sound live and to tell you the truth I didn’t expect to see them live as they were inactive for a long period of time. So, guess my excitement when I heard about their new album ‘The Holy Empire’ and some live shows to celebrate this release.

I was at the club at about 20:45 and as I was waiting for the band to show up on stage I consumed some beer in order to prepare myself for the upcoming show. To tell you the truth I didn’t expect many things from this show as I’ve seen some videos on youtube from their gig in Keep It True Festival and a Greek TV show were Warlord performed and I wasn’t impressed. More people were filling the club as the time was passing, but I didn’t manage to find out how many people attended the show.

The show was programmed to start at 21:30 with no support bands and was a little delayed so it was about 21: 50 when the intro started, making the crowd go mad and shout the band’s name, whistle and scream. It went totally out of control when then band came out with “Deliver Us From Evil” singing along the melody of the song and lyrics. The band was amazed by the welcoming crowd almost not believing its reaction.

With no big talking the band continued with “Winter Tears” that had the same response from the crowd and band. Mark Zonder was in his best shape that I have seen smashing the kit with his furious rhythms. The sound of the band was great during the whole show but the club had very high temperature and the air vents didn’t work the whole time which resulted in getting wet by the sweat in seconds. A little break for the band to catch a breath and after singer “Giles Lavery” thanked us he announced the next song “Child Of The Damned” with the crow going completely nuts. The songs come one after another while the crowd didn’t stop singing and cheering in “Penny For A Poor Man”, “Black Mass” and during Mrs. Victoria there was I little confusion in the beginning between Lavery and Angel, the keyboardist that is also Greek and was constantly urging the crowd to show its love for the band. Giles Lavery’s performance was sincere, giving all that he got to bring out the best of him.

“Bill Tsamis” thanked us often and played his parts almost flawlessly making a great guitar twin with season guitarist “Paolo Viani”. “Lost And Lonely Days” was followed by “Aliens” and “Soliloquy” with this amazing atmosphere going on in the crowd. Bassist “Philip Bynoe” who has also played with the amazing “Steve Vai” and is also the bassist of the band “Slavior” whose member is also “Mark Zonder”, contributed in the enormous rhythm section as a true professional musician.

They played four songs from the new album “City Walls Of Troy”, “Kill Zone”, “Father” and “Glory” where the crowd calmed down a little while the band was unstoppable, playing the songs with precision. After “Glory” Bill Tsamis said a few words, he thanked us and then introduced the whole band with the crowd applauding and screaming the second names of Tsamis and Zonder.

After that he gave the signal in Greek saying “Let’s Go” and played “War in Heaven” and “Winds Of Thor” from “Rising Out Of The Ashes” making the crowd go wild once again. They stopped for a while and then came out for an encore with “Beginning / Lucifer’s Hammer” and ended the show with “Achilles Revenge” around midnight leaving me speechless from what I had just experienced. Whoever wanted but didn’t attend for any reason this gig, lost one of the greatest and most sentimental shows in Greece at least for 2013.