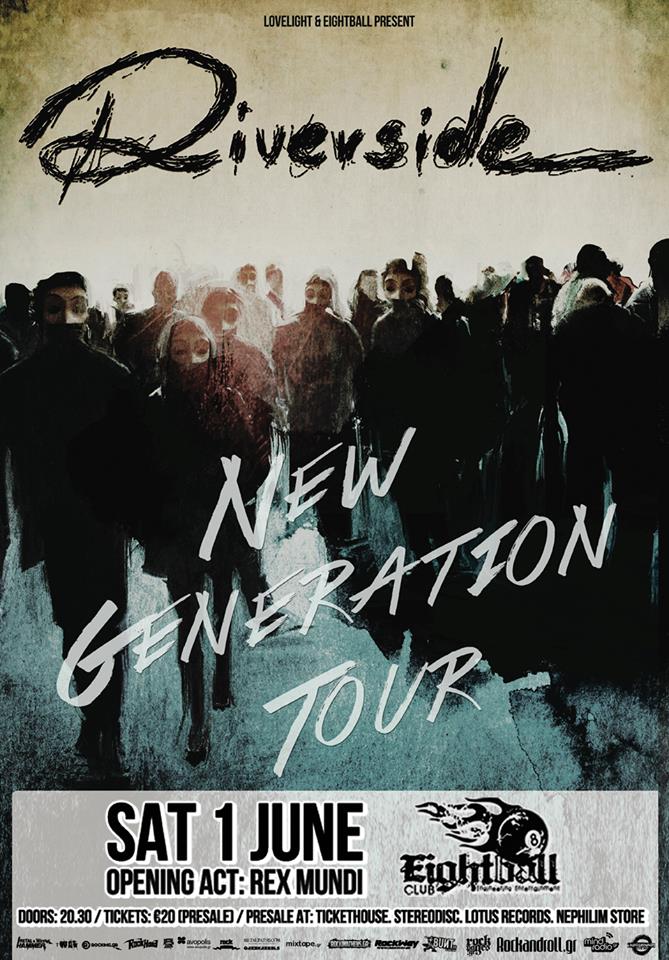 Saturday 1/6/2013 and finally the time had come to see for the second time one of my favourite bands “Riverside“. The doors were opening 20.30 and i arrived at 9 o’clock. At that time weren’t much people at the venue. Fortunately as the time passed more and more people were coming. There was a support band arranged to open the show, but unfortunately their appearance was cancelled due to lack of space on stage (…!), there was no room at all to set their equipment and no chance of using Riverside’s, so… No Rex Mundi..

Finally some minutes before ten o’clock we heard the first few notes from the bands intro Nightsession 1+2 so we knew the time had come. 10 o’clock sharp the lights went off and the Polish progsters finally got on stage!

From the first notes i got in all my body goosebumbs, perfect sound and perfect perfomance, you could hear each instrument perfectly clear, professionalism in every level!!! I have been in over 40-50 concerts, there are very few bands who have such live sound and perfomance.
The emotional compositions and meaningful lyrics of the band makes you almost cry in their concerts.

Of course i knew that from the previous time i saw them in 2010 again in thessaloniki but i got blown away once again.
The band played almost their whole latest record 3 songs from their previous album Anno Domini High Definition, 1 song from their EP from last year and only two songs from the previous albums.
The band played almost 2 full hours (1 hour and 55 minutes). Really guys whoever have the chance to see this band live don’t miss it, it’s one hell of an experience!
The only thing that bothered me as the previous time also is that they dont play anything from their first albums and i loved to hear something from these albums. Hope next time!

PS.: Also the merchandise was a bit expensive but i think the government is responsible for this because of the high taxes.