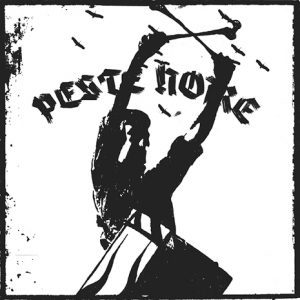 This is top-tier black metal. It is undeniably malevolent and oftentimes frantic, but oddly harmonious. The trio of French musicians have outdone themselves with their self titled album, releasing black metal that pays homage to their culture while retaining the cold atmosphere that the genre requires.

“Le Retour De La Peste” is an accordion laden call to arms, foreboding in tone and overwhelmingly magnificent. Famine’s voice rises above the instrumentation to deliver what sounds akin to a rousing speech. Motivational may not be the word, but for the non-French speaker, it evokes the concept of power. The atmosphere persists to “Démonarque”, completed with the addition of Ravenlord’s guest vocals, well placed flute and hurdy gurdy. Exaggerated vocal performances are layered over blended instrumentation, which adds to the overall theatrical nature of this album.

Peste Noire’s self titled release, however, could hardly be labeled as experimental. As avant-garde as it all seems, this work is malicious at its core. The interludes are not there to take up space and even the most serene of them is daunting. Every minute of this album is a meant to intimidate. Even the surprising addition of trumpet in “La Bêche Et L’Epée – Contre L’Usurier” provides a wall of sound that can make the most hardened listener quail in response. Quirky time signatures and guitar riffs plague the entirety of “Niquez Vos Ville“, adding a theatrical edge in the vein of Arcturus, while not forsaking their own attributes as a band.

“Le Clebs Noir – De Pontgibaud” is a downtuned mesh of themes from “La Retoir De La Peste” with an added intensity and a militant vibe. The confrontational nature of this song is followed by the much calmer Ode. A sort-of ballad piece, it is a dissonant piece riddled with acoustic guitar and further use of the hurdy gurdy. For such a sedated track, Ode manages to be one of the most cacophonous on the album. La Blonde picks up the pace once more, embracing the off-beats and injecting more of Famine’s eclectic vocals into the mix. Finishing the album is “Moins Trente – Degrés Celsius“, the perfect conclusion for this harsh and stunning release. Soothingly desperate and simultaneously painful, there is so much to be heard, and this track draws everything to a close.

Peste Noire is portraying what black metal should be, an ugly and discordant beast full of pure spite. Ignoring the sounds of their Scandinavian brethren, they’ve created something that is uniquely theirs. Their use of recurring themes brings the album together as a single entity with many parts. Every track fits with the next and they revisit tracks frequently without boring the audience. They consistently incorporate their own concepts that are influenced by French culture, and they are unique. This album does not disappoint.