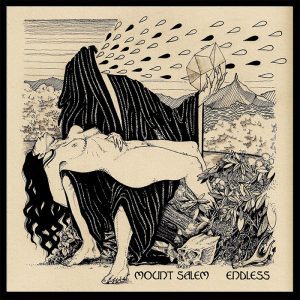 I was always digging into female-fronted doom metal bands, such as Witch Mountain or Royal Thunder. Women can add a magical tone to the music, even better than men. They sound more attractive, more elegant and you must believe me, doom metal sounds unimaginable beautiful with female vocals. Mount Salem, coming off Chicago’s talented music scene, encircles the beauty of a woman’s voice with satanic, heavy doom metal. They managed to record and produce an interesting EP, titled ‘Endless’, which I personally wished it would be.

‘Endless’ is a six song EP, a really heavy one. The record features groovy doom guitars, organ background fillings and some extraordinary melodic vocals. The band sounds heavier and less psychedelic than Uncle Acid, more straighten out from Black Sabbath and even contains some stoner metal aura in those songs. Bass makes its appearance in most of the songs as the groove element on which the song will progress through. The drums are chaotic, making an impact from the very first song in this record. All the songs are based upon the vintage sound all those kind of bands use, with overdriven guitars and old-school, non-double pedal drumming.

Opening song of the record is ‘Good Times’. The song starts explosively, with a groovy guitar rhythm and organ parts behind it. With slowed down verses we are introduced to the beauty of Emily’s vocals. The range of her vocals is easily recognizable on the choruses. ‘Lucid Dreams’ comes up next with those ambient bass lines and vibrato guitars. I love the way the band manages to sound so modern as well as being so much influenced by the 70’s. ‘Full Moon’ is the third song of the record and takes off with an ambient guitar part, along with deep and slow, blues vocals by Emily. After the first minutes, the song passes through a faster part, a heavy metal dynamic in the doom paradise.

At this part the album comes upon ‘Mescaline’, a -two and half minutes- filler song. Blues, clean guitar melodies along with keyboards and pompous drumming, as the record slowly progresses to ‘Hysteria’. ‘Hysteria’ sounds quite influenced by Black Sabbath to me. The main guitar riff along with the groovy, sharp part in the verse reminded me of Tony Iommi’s pentatonic riffs. Kyle performs excellent in this one, playing a great and remarkable guitar solo too. Last one for ‘Endless’ is ‘The End’ (what a title for an ending song). The record closes with dizzy guitars, creative drumming and hopes for another great record like this one.

Mount Salem surely makes a difference in the specific music genre. The band is unique and very talented. I’ve many expectations for the next record of the band and I hope they will find their way, creating even more memorable melodies and vintage-influenced music.