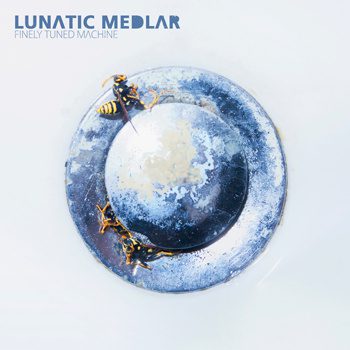 When I first heard about Lunatic Medlar, I was really curious about what the band could produce. With members of Tarvide Dyskinesia, Universe217, Konkave and Sun of Nothing, we can only expect something really good. The collaboration between all those members is something really interesting, if we consider the fact that all those bands are included in the list of the best metal bands of Greece. Their debut album is titled ‘Finely Tuned Machine’ and its early release gave an end to our anticipation and curiosity. Let’s take a deep journey into what Lunatic Medlar have achieved.

‘Finely Tuned Machine’ includes eight songs and is mostly an instrumental record. The songs can be characterized as a fusion of doom metal with post metal elements. I would call it a mixture of Mastodon and Cult of Luna, with groove guitars, doom riffs and progressive touches. The level of experimentation is pretty high, with progressive elements all over the songs. With the ideal production (done by Steve Lado), we have a modern sound that reminds of post bands like The Ocean or Mastodon, only under a heavy rock and doom metal prism.

As I’ve said before, ‘Finely Tuned Machine’ is mostly an instrumental record. That is the only negative fact I find on the record. The parts where the vocals come in (in ‘When the Bell begins to Chime‘ for example), the band reaches its peak and the songs become completed. I have nothing against instrumental records and I admire a lot of instrumental bands (Russian Circles for example), but in the case of Lunatic Medlar, some post metal vocals would be ideal, over those awesome melodies.

The record is full of awesome guitar melodies, with a lot of changes in the riffs and heavy drumming. My personal favorite is ‘Oceania’ and I think that the melodic guitar riff in the middle of the song, under the narration is the very best moment of the record. The opening song, ‘When the Bell Begins to Chime’ opens with a doomy riff that reminds me of Black Sabbath, with a lot of heaviness in its progression. ‘At Lust’ feels like the prequel of ‘Oceania’ and the guitar’s parts stick in our ears. ‘Blob’ is a song which refers to the movie ‘The Blob’, which is one of the best cult horror films. With thirty five minutes of music, I can say that the record does not get the listener tired as it would if it was over fifty minutes. It is a positive fact that it flows easily.

Surprisingly enough, ‘Finely Tuned Machine’ came out of nowhere and deserves a position into my personal favorite records of the year. The only thing that I would prefer is Lunatic Medlar to have included some kick-ass vocals in the record. As far as the music is concerned, Lunatic Medlar have done a remarkable work. I am looking forward to see them performing finally, as I missed their show in New Long Fest.